Muse inspired by Book 54 - The Cellar 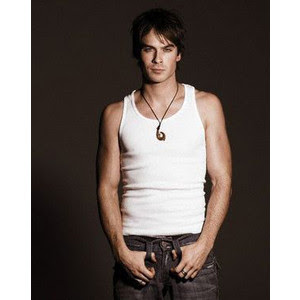 I went to bed last night thinking about zombies.

No shocker, then, that I also dreamed about them. And just when an astonishingly good looking zombie named Adrien was figuring out the best way to eat my brains, Damon Salvatore, er Ian Somerhalder swooped in and turned me into a vampire. Hey, it's my dream.

Ian's been my muse a few times before, but in light of the fact that he essentially saved my life last night, that deserves another shot at inspiration. Ian, you're hired! (And since Vampire Diaries is on seasonal hiatus, I doubt you're that busy...)

But Adrien is special. He's the antagonist in A.J. Whitten's not-yet-released YA novel The Cellar, book 54 in my 100 Books of 2010 challenge.

A fellow blogger pointed me to Galley Net, a cool place where book reviewers / readers can download digital advance reader copies. It's no surprise Karen and I picked out the same title - for her, I suspect "zombies" caught her attention. I was drawn to the "Romeo and Juliet" (and zombies) part. 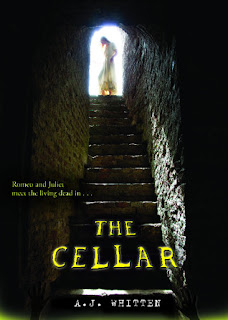 The Cellar is like no other book I have ever read. I don't have an e-reader, and thus was forced to read this galley on my computer. If ever I needed inspiration to buy a Kindle, this is it. Mesmerized by the first page, I wanted to take The Cellar everywhere - into the bath, my bed, my purse. And when a power outage in my neighbourhood meant I couldn't charge my laptop, I bit back a string of curses.

Adrien is a zombie - a good looking, sweet talking, brain eating zombie. He has his designs on Heather, a lost teen who is guilt ridden over the death of her father. But standing between them are  undead, and human obstacles, like Heather's sister Meredith.

Meridith has an interesting problem with her eyes, so when she sees worms swimming behind Adrien's normally sunglassed gaze, she isn't sure whether to trust her instincts or head back to the psychiatrist.

The plot is fast-paced, and the description is beautiful - and freaking gory. Like, way too gory for what I might expect from a YA book. That's not a bad thing, because, if it's possible, the brain-eating, bug-crawling narrative is so well done it's actually tasteful. The Cellar is tightly written, and to my shock, has fast tracked it's way into my top 10 books I've read this year.

The Cellar launches January, 2011, and though I've read it, I'll be waiting outside the book store to be one of the first to buy a hard copy. An excellent book about zombies - and a tragic love story.

The Book in My Bag Today: Going Bovine, Libba Bray
Posted by Dawn Ius at 11:00 AM