Breaking from the norm 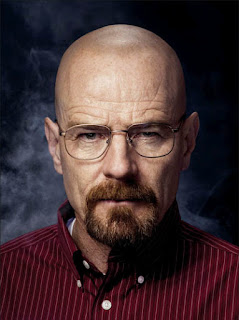 I'm breaking from my traditional Muse Avatar fare this week to highlight an actor that inspires me far more than even the hotness that is Kiefer Sutherland, Alexander Skarsgard or Adam Levine.

For the past few weeks, hubs and I have been obsessed with Breaking Bad, in my opinion, one of the most well-written drama series on TV today. There's a number of reasons I've dubbed the show brilliant, but a lot of it has to do with the characters - and the amazing cast members who have brought those characters to life.

I've featured Aaron Paul on my blog before, and in addition to being pretty darned cute, he absolutely deserves last night's Emmy win in the outstanding supporting actor category. He is outstanding.

But I'm most enthralled with - in awe of, inspired by - Bryan Cranston. No doubt his performance as the meek-chemistry-teacher-gone-major-bad-dude Walter White is fuelled by the complex character created by the show's mastermind, Vince Gilligan, but Cranston's portrayal is mind boggling.

And a blatant reminder of the importance of characterization.

Walter White is an extraordinary character - sympathetic, flawed, driven, even desperate. And the potential for growth? Staggering. Perhaps one of the greatest examples of an over-the-top yet somehow believable character arc. I'm invested - 100%.

Long after I (reluctantly) turn off the DVD player, I think about Walt - about the decisions he's made, and most importantly, the motivation behind them.

As I push through the last 10,000 words of HEARTLESS, I've been thinking a lot about character motivations. I've got a lot - too many - projects on the go, but there is no other character I know better, or love writing more, than Jagger Valentine. And yet, with this first book in the series, I have only started scratching the surface of what drives her.

I had a tough weekend, and a crappy start to the week to boot. The next few days don't look much better. But if I'm going to cross the finish line of this book, I need to channel my inner Jagger - and perhaps some Walter White - and push emotion to the side. I need to do whatever I must to get the book done. Without breaking bad, of course.

I can't think of a more inspirational muse avatar for the week than the brilliant Bryan Cranston.

PS - Those last 10,000 words? Yeah, they're a bitch. Tomorrow I'll be talking about my strategy for typing "the end" (sooner rather than later) on the Indie Elite blog. Please...come hang out, laugh at my psychosis, or offer some block-busting tips. Pretty, please?

The Book In My Bag Today: Carnival of Souls, Melissa Marr
Posted by Dawn Ius at 5:01 PM No comments:

More than an inspirational voice 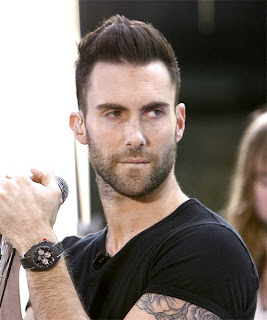 Okay, let me get this out of the way: Yes, handsome hubby, you ARE better looking than Adam Levine, and while it may *seem* like I have a small obsession with the Maroon 5 frontman this past week, I assure you, it's strictly from a research/writing point of view.

It's no secret I'm a fan of reality-based talent shows, and for years have followed American Idol, despite my favorites almost never winning the title. If not for the addition of Stephen Tyler and Jennifer Lopez a couple of seasons ago, I may have forfeited the show for good...

I think Idol's days - for me - are done. Stephen and Jen are off the show this season, and last year, I fell in love with a new reality-based sing-off - The Voice.

Admittedly, a lot of that has to do with Adam Levine. Sure, Blake Shelton has some country charm, and Cee-Lo is funny in a creepy sort of way, and I'm vaguely intrigued by the hot mess that is Christina. But really, I'm invested in Adam - the way he begs for the artists he wants, how my heart aches when they choose another coach (are you NUTS, people?!), the way his face lights up when the sane people DO choose him.

And then I heard this new Maroon 5 song...

...and something creative popped.

I'd been struggling with a character/plot point with HEARTLESS for a while, and something about the lyrics, or the video, or just Adam Levine's voice/face/smile/ unlocked the key to my writer's block.

Despite being down and out with a cold for a couple days, Sunday turned into a fairly productive writing day - and I'm pretty sure I have Adam (and of course, YOU handsome hubs) to thank for that. But why stop the creative drive at Sunday?

I'm so close - SO close - to finishing the first book in this series that I know if I applied myself I could  be typing THE END by the end of the week. Since Adam did such a great job this weekend, I figure it couldn't hurt to cast him in the role of MUSE AVATAR for the WHOLE week.

Have a great week! I know I will.

The Book In My Bag Today: Carnival of Souls, Melissa Marr
Posted by Dawn Ius at 10:43 AM 2 comments: