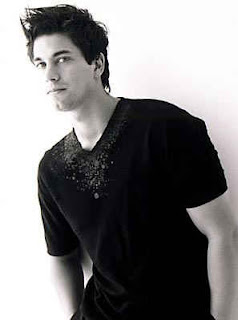 To say I'm excited by the new fall TV line-up would be a mild understatement. I'm borderline obsessed. I blame it all on my new Global TV iPhone app.

My friend Sue told me a few weeks ago that I could watch episodes of Days of our Lives if I downloaded the app, which has pretty much ruined my late-afternoon writing time (bad, Sue!) On the flip side, I'm much happier to make dinner or do other household chores, since my "TV" is portable. Nothing like folding laundry while watching Bo and Hope proclaim their undying love...again.

But Friday I was feeling kind of blue - a day for regrets, self-doubt, and wishing I had a time machine. (*end of pity party starts now*) Instead of writing productively, I watched a hella lot of TV on my Global app. I've already bookmarked a few of my favourites.

Like Sarah Michelle Gellar's new series, Ringer. I was NOT a Buffy fan. *ducks* And Ringer is being trashed by reviewers. But I've seen the first two episodes and have already added it to my "must-see-TV" list. Hubby...not as impressed.

So what's this got to do with Adam Garcia, this week's muse avatar?

In addition to my standbys, Supernatural, Vampire Diaries, Glee, and now Ringer, I've fallen head over heels for the police/crime drama, Prime Suspect. I love the grittiness of it, and I've always been a fan of Maria Bello, who I first saw on Coyote Ugly.


She starred alongside Garcia. Between his sexy accent, his adorable addiction to comic books, and his unwavering support of his girlfriend's talent (when she isn't shaking it on the bar), I challenge any girl not to have a crush on him. He's freaking cute!

I've been dabbling in TV scripts for a while now, and this weekend found myself ankle deep in a new idea (surprise!) that I *must* explore - even for a few hours. Although I don't think Adam is on the small screen (or any screen lately, for that matter), he reminds me of Maria Bello and my new show addiction, Prime Suspect. And of course, my new project...

I doubt he'll keep me on track (the non-new WIP list continues to collect dust) but he may just provide the inspiration I'm looking for to explore this new venture. And isn't that what a muse is for?

I'm almost afraid to ask...have I missed any of the season's great new shows? (I'm patiently waiting for Once Upon a Time and Dexter...) What's on your "must-see-TV" list?

The Book In My Bag Today: The Hypnotist, Lars Keplar
Posted by Dawn Ius at 9:08 AM 6 comments: 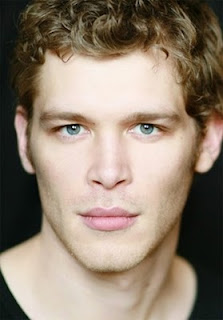 In anticipation of the new season of The Vampire Diaries - and thus the thrilling return of Ian Somerhalder to my television screen, dreams, and Monday morning blog posts - I'd almost glossed over other potential muse avatars.

That is, until my stepdaughter and I watched the season premiere on Thursday, and I was reminded of Joseph Morgan, who stars as Klaus - an even "badder" vampire than Damon. Shocking, I know. (He's actually a hybrid...a were/vamp...but um, that's irrelevant here...)


Despite my not-so-secret attraction to bad boys, the "once-morally driven-now-serial killer" Stefan isn't quite up to muse-inspiring par.


There's something compelling about his character, and his portrayal of it. Klaus is clearly a bad-ass, but he does his dirty work with charm, and a killer, melt-inducing smirk. I want to look away, but there's this naughty twinkle in his eye that paralyzes me like a male Medusa.


I love the dynamics of his character, and am hopeful Joseph Morgan will be up for some one-to-one discussion about what makes Klaus tick - and how he can be so awesomely evil, but so freaking sexy as the same time.


The Book In My Bag Today: The Hypnotist, Lars Keplar
Posted by Dawn Ius at 9:21 AM 5 comments:

In anticipation of the muse 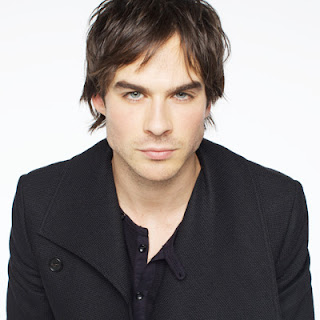 Don't even get me started about last night's finale of True Blood. I'm as undecided about it as I was many of the story lines throughout the season.

One thing I DO know is that I'm going to be waiting a heck of a long time for another dose of Eric. I may have to return to the books to tide me over - or start watching the series again.

Thankfully, my other muse-worthy vampire is back this week. The season premiere of Vampire Diaries airs this Thursday, and I can't wait. In addition to getting my weekly fill of IAN SOMERHALDER (Damon), I'm also guaranteed some one-on-one time with my stepdaughter.

As far as Mondays go, this one hasn't been great (and it's still early...) Very little writing happened over the weekend, which means I'm behind. Shocker, I know.

Here's hoping Ian can help me get over Eric (ha!) and excel at his job as muse avatar. Should be a piece of cake - he's been cast in this role so many times he could do it with his eyes closed. Personally, I hope he keeps them open. He has amazing eyes.

The Book In My Bag Today: The Hypnotist, Lars Kepler
Posted by Dawn Ius at 8:33 AM 7 comments:

Those were the DAYS muse 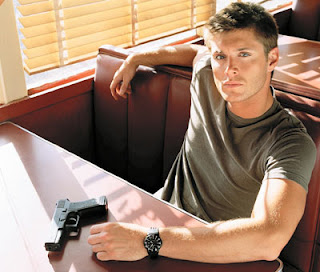 Over a year ago, when I started Muse Avatar Monday, Jensen Ackles was my first muse. Seriously, do you blame me?

So every once in a while, like when I'm starting something fresh - or simply gearing up for a new season of Supernatural, I like to bring him back. Surprisingly, I've not heard any complaints.

But Jensen's purpose as muse avatar this Monday is actually three-fold.

Long before he was Dean on Supernatural, Jensen played Brady on the daytime soap opera Days of Our Lives. No really - would I lie about that?

Check out this clip. (It's long, but you'll get the idea in the first 30 seconds.)

I've actually been crushing on him since then, because Days is my guilty pleasure. Last week, my friend Sue introduced me to an iPhone app that lets me catch up on Days - while I'm making dinner. Or riding passenger on the way home from work. Or suffering insomnia. Why the heck didn't I think of that?

Watching Days is like going home. My Nona and I used to watch it when I was a kid - and I'm not surprised that some of the plot lines and power couples are still the same. (Confession: I once wrote "Bo and Hope Forever" on one my school binders. Sad, I know.)

This writing week, I'm going back to an old project, working on a new WIP, and uh, gearing up for Supernatural. In several ways. I can't think of a better muse avatar than Jensen.


The Book In My Bag Today: The Hypnotist, Lars Keplar
Posted by Dawn Ius at 1:18 PM 3 comments: