Rocking out with the muse 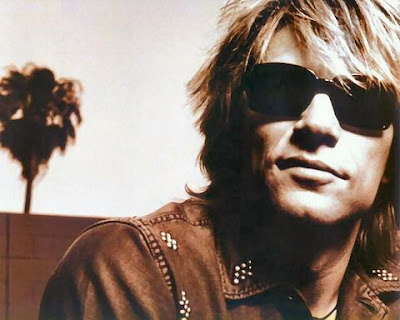 I had a best friend in high school who taught me a lot about Rock and Roll - or more accurately, she taught me the proper way to attend a concert. We went to hundreds back in the day, pretty much spending every spare penny on rock. Or metal. Or glam.

Actually, *I* spent a lot on Bon Jovi - she was never really a hard core fan. Over the years, I've probably been to a half dozen Bon Jovi concerts, a far cry from the 80 Def Leppard gigs she's attended across the world. I don't go to a lot of concerts anymore - they're expensive and I don't have the same patience to wait in line for tickets or to fight with Ticketmaster.

But, I'd probably still stand in line for Bon Jovi tickets.

Bon Jovi isn't the same band I fell in love with in the 80's. Jon's poofed and hairsprayed coif is tamed, the music has changed (at one point, the band even dabbled in country), and save some cover-up, I bet there's very little make-up to be found.

Some things remain consistent, though.

Bon Jovi puts on one hell of a show. No seriously, Jon knows how to work the stage, and for those of us in the nosebleed seats watching on the big screen TV, he understands how to play to the camera. I always feel satisfied after the show, even if I wasn't  front row. Which is pretty much how I feel after an Aerosmith concert - but Jon Bon Jovi is immeasurably better looking than Stephen Tyler. Just saying.

There's a meme going around Facebook showing how some of the 80's rockers have aged over the years. Jon has always been gorgeous, even with his wild hair and tight Spandex. These days, he's a tamer, more traditional hottie who has traded in his Spandex for jeans. Tight fitting jeans, mind you. But I'm okay with that.

There's a whole bunch of reasons Jon stands out for me. Loyalty to his high school wife (unless I am completely snowed by the tabloids), excellent performance skills, fabulous voice, great smile, and the ability to adapt to an ever-changing world.

It's these same characteristics that make Jon Bon Jovi the ideal muse avatar. As I plow through the final scenes of Killer's Instinct, which I am co-writing with the awesome Judith Graves, there's a few things I need to keep in mind - a few lessons I could learn from Jon, you might say.

1. Loyalty. Not to my spouse - that's easy. But to the readers. Making sure to deliver a product that is something they will be proud of, and conforms to the PR we've been pushing out about this fabulous monster book.

2. Performance. Writing the best fiction I can. Choosing words, sentences, paragraphs that flow together and create emotion. Telling the best story possible.

3. Great voice. Ensuring authenticity in the voice, keeping in mind our audience expectations, the beauty of a collaborative effort.

5. Adaptability. This book has evolved so much since the initial inception and I suspect that will continue through to the final edits and the eventual release. Our ability to adapt will ensure this book's success. Change is good, donkey.

It's interesting sometimes to see how life circumstances can somehow parallel writing lessons. What rocker - or rapper, opera singer, dancer, etc - fuels your inspiration and why?

While you're thinking about that, I'm getting back to writing. Excuse me while I shuffle my iPod through some Bon Jovi.

The Book In My Bag Today: Scarlet, Melissa Meyer2013 Resolutions StatsTotal words last week: 2,757 (CLEARLY lower than my expectations, BUT, I am in final stages of Killer Instinct and It's a Blast, which means more time spent on edits/revisions than new words. April will be a better month...)Total words to date for 2013: 57,762
Total pounds lost for week: 21 (Barely - the Easter chocolate during revisions is killing me! My new home gym is set up and ready for use)
Total pounds lost to date for 2013: 26
Books read last week: 0 (but started Scarlet and am DYING to finish it - still. Have I mentioned how excited I am for April?)Total books read to date for 2013: 6Movies watched last week: 0Movies watched to date in 2013: 4 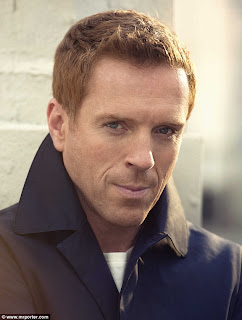 I'm more than a little obsessed with Daniel Lewis these days.

Before his role as Nicholas Brody on the TV series Homeland,  I admit, I didn't pay him much mind. But now, he's got my full attention, and not just because I think Homeland is one of the best shows on TV right now, or even that he's fairly easy on the eyes.

Daniel Lewis is brilliant, and his character on the show is complex, flawed, sympathetic, and wonderfully developed. Homeland isn't my normal fare, but every evening, I use an episode as reward for a solid day of writing. Inspirational, yes - and Daniel is muse-worthy indeed.

Sadly, I didn't "reward" myself as much as I'd hoped last week. After a month's hiatus on the New Year's Resolution goals, I had high expectations of myself - 10,675 words, actually. I hit almost the halfway mark, turning in a respectable - but not reward-winning - 5,005 words.

The good news is, it doesn't have to. 5,005 words is nothing to sneeze at. Plus, I've spent a lot of time editing/reviewing and plotting, since the first draft of Killer's Instinct is due end of March - so it's not like I've been sitting idly by, not writing or doing something writing-related.

The thing is, I'm really excited about this book, which I'm co-writing with the awesome Judith Graves - and I want readers to be excited, too. So until it's finished, I'm okay with running a bit of a deficit if it means the end result is a solid, well-written book.

Except...Homeland (season 2) is at a really thrilling part and if I'm going to use the show as a reward for good writing behavior, I'd better get cracking.

Speaking of thrilling, last night's Walking Dead? Tense! No spoilers if you haven't seen it, but it's been a long time since a show has had the ability to make me hold my breath. Not even my current TV thriller obsession, The Following, has done that. Great episode! You think?

So, what TV shows are thrilling you right now?

The Book In My Bag Today: Scarlet, Melissa Meyer 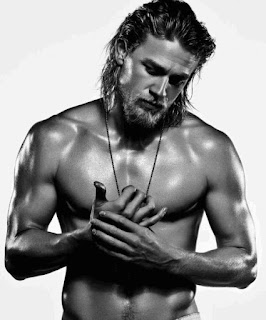 Although I made some pretty hefty New Year's resolutions and a promise to myself for accountability, my last blog post was February 12 - a whole month ago. That's about the last time I wrote any words of significance, too.

Despite this, February - and the first couple weeks of March - did not suck. True, I wrote very few words of significance - in fact, when I count last week's meagre efforts, I'm just up to an even 50,000 for the year (that's not a coincidence, I ended last night right at that number so I could start fresh.)

But here's the thing. For the past two years, almost three hours of my weekday was spent driving. We lived out of the city, even though hubs and I have jobs IN the city, and while we enjoyed the peace of the country life, Alberta winters are long - and dangerous. Not to mention, the drive was a huge time suck, and significant cash/gas guzzler.

In February, we began the moving process and March 1, officially moved into our new home - in the city (a mere 20-minute drive to work). Yes, we lose the country, but our new back yard is like a forest, offering the feel of the country - and that's almost better. The house is brighter, with hardwood floors and tile throughout (easier to clean up after three dogs), and even though the yard is not fenced (yet...Spring project), an intricate path system provides ample walking room for the dogs.

I LOVE my new house. Love it. But moving is hard work. Unpacking and organizing is also hard work.

Which is why I didn't write.

I am today, though. This month, the first draft of Killer's Instinct MUST be completed. Judith Graves and I are working on that now. To reach my New Year's goal, I need to pump out 1525 words a day, every day, for the rest of the year. Let's be real. That's likely not going to happen. As February has taught me - life happens.

That doesn't mean I'm not going to try, though. I'm just going to cut myself some slack if the words don't all come at once. (Except this month...because yeah, I need about 25,000 words for March to finish Killer's Instinct.)

It also means I need a heavy duty muse avatar to push me in the right direction. Charlie Hunnam is just the guy for the job. Man, I miss Sons of Anarchy!

So, with muse avatar firmly in place, it's time to stop talking - and time to start writing. Onward!

P.S. - February also didn't suck because despite missing my writing goal, my weight loss goal is well on track. Down 25 pounds since January 1. WHOOPA!

P.P.S. - February also didn't suck because illustrator extraordinaire James Grasdal and I finished the third canola book. It's a Blast launches in April. I can hardly wait to share this story with the kids.