The Blurb:
In late 2011, Jessica Bell and I founded Vine Leaves Literary Journal to offer the vignette, a forgotten literary form, the exposure and credit it deserves.

The vignette is a snapshot in words, and differs from flash fiction or a short story in that its aim doesn’t lie within the traditional realms of structure or plot, instead it focuses on one element, mood, character, setting or object.

The journal, published quarterly online, is a lush synergy of atmospheric prose, poetry, photography and illustrations, put together with an eye for aesthetics as well as literary merit. The annual print anthology showcases the very best pieces from across the year.

From the haunting prose of Theresa Milstein and Carrie Mumford, to the controversial and quirky work of H. Edgar Hix and Greg Belliveau, the pathological effects of cigarettes and apple seeds, ice sculptures and mental illness are explored. We meet a lovable old man named Joseph and find out out how the good old washing machine can change one’s life. Oh, and how could we forget a mention of the mother with the scissors?

Each vignette merges to create a vivid snapshot in time and place. Prepare for big stories in small spaces, between and beyond the words.

Read one at a time.

Taste them. Savour them.

PRE-ORDER to receive your discount on the recommended retail price:

For more than three copies contact sale(at)emergent-publishing(dot)com for discounts on shipping.
Posted by Dawn Ius at 10:51 AM 4 comments:

Breaking for some aMUSEment 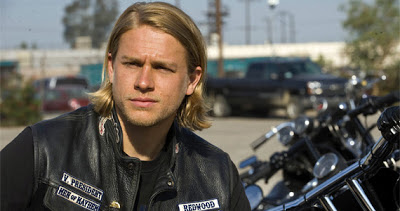 November was supposed to be a no distraction zone. Limited social media, gradual cut-backs on favorite TV shows, and no blogging - not even a Monday Muse Avatar.

But then I finally, after much prodding and teasing from family and friends, discovered SONS OF ANARCHY - and of course, Charlie Hunnan (aka. Jackson Teller). Trust me, Jax is worthy enough a muse for me to come out of the NaNoWriMo darkness and talk a little about my new obsession with this show.

Yeah, I'm not going to lie. It IS a bit of an obsession. Admittedly, I'm not the only one in the house with a  SONS OF ANARCHY crush. We watched three quarters of the first season this weekend, and I suspect some of our regular weekday programming like The Voice, X-Factor, and Revolution will be on PVR hold until we're caught up on all...five?...seasons. I'm not complaining.

The picture really doesn't do Charlie justice. I've known enough bad boys in my life - heck, I even married a former "bad boy"- and yep, Jackson Teller epitomizes the stereotype. Part of a motorcycle gang, smokes and drinks and swears, involved in plenty of illegal activity, looks damn fine on his Harley. A classic bad boy.

But that alone isn't what makes him swoon-worthy.

The Jackson Teller character is well written, though it straddles the line of cliche. Part of the reason I think it avoids the dark side - or maybe we just choose to ignore it - is because Charlie Hunnan has invested a lot into the role. I believe him. I believe in him. And not just because his adorable smile makes my heart skip a beat.

Sure, the other actors are compelling. Ron Perlman is brilliant as club president. Kim Coates is incredible in a very creeptastic role. I could go on and on. But something about the way Charlie walks, talks, smiles, even fires a gun seems almost effortless, as though he's not acting the part of Jackson Teller...he just is.

Which is something to keep in mind as I'm writing my NaNoWriMo book, NEED. This WIP is nothing like I've worked on before - and yet, it's flowing from me like no other book has before. Maybe it's because I've opted to turn off the internal editor, or maybe it's because it's fresh blood, something new to sink my teeth into. Regardless, I'm invested - and the end result based on feedback so far is that the character is believable. Her story is believable.

There's still half of November left and I'm behind on my word count. I think I can catch up - as long as the next season of SONS OF ANARCHY stays at HMV, and especially if I cast Charlie in another important role - my muse. Here's hoping he tackles it with the same effortless brilliance.

Going back under now. Hope your NaNoWriMo efforts are going well.