Bringing back the Muse 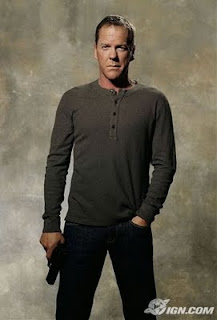 It's been forever since I've posted a muse avatar. Some of you haven't forgiven me - and I have a feeling this picture of Kiefer Sutherland / Jack Bauer won't win back your love, either.

I know, he's kind of an acquired taste.

Whoops. Sorry about that. I've got about 25 songs wormed into my brain after a marathon script writing session with the awesome Judith Graves.

Despite the lack of muse avatar, I have been writing. Lots, actually. With more than 10 projects on the go - yes, 10 - there's always something for me to do. And, yes mom, I do know, that taking on too many projects often lends itself to failure.

Unless you have Kiefer Sutherland in your back pocket - which I do.

As Jack Bauer, Kiefer is bad ass. He doesn't take crap - from anyone. He's focussed. Annoyed by stupid, petty people, and infamous for pissing people off in his wake. But at the end of the 24-hour day, stuff gets done. Jack has redeemed himself as a hero, he gets the girl (just before she dies / turns psycho), and he's restored faith in The People. Go Jack!

This week, my friends, I'm in need of a hero like Jack.

The script in all is awesome glory may be done, but it's just one project completed on deadline (ahead of deadline, actually...huh...) and the bigger one - the thriller - remains half done.

If Jack were here right now, we'd be in b he'd be yelling at me to get my ass in gear.

So here goes. The return of Muse Avatar Monday - and Jack. Now go forth and inspire some bad ass writing...

Happy Monday. I hope everyone had a wonderful Easter weekend.

Living with Crash & Mars - the movie (and the end)

Last week I took my adventure story Living with Crash and Mars to Edmonton Public Library writer-in-residence Marty Chan for a short critique. I was wearing my Genius Mode cap, certain the celebrity author would praise my efforts.

Apparently my characters were nothing more than cardboard cut-outs.

My plot was flat.

And my dialogue - emotionless.

Harsh words for an aspiring writer.

I spent a few days wallowing in self pity. But on Friday, after I'd returned Crash and Mars to the 102.3 Now Radio studios, and I'd gobbled up the final spoonful of Rolo ice cream, I had an epiphany. Living with Crash and Mars wasn't a short story.

It should be a movie.

So, this weekend, handsome hubby and I shot the trailer - I know, go big or go home, right? It was absolutely worth the fighting gentle disagreements. In fact, I think even Marty Chan will agree, Living with Crash and Mars is destined to be a blockbuster.

What do you think?

A special thanks to the many Alberta authors / storytellers / poets / illustrators who participated in this event, but for also dedicating their lives to the promotion of literacy through a love of reading and writing. I am so lucky to be surrounded by their greatness every day.

PS - A huge thank-you also to all of the people who called or e-mailed the Young Alberta Book Society over the past two weeks to volunteer for programs, to donate in support of youth literacy, or to register for the upcoming summer youth writing camps. 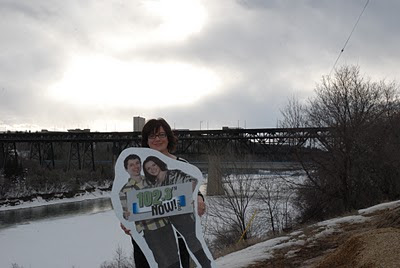 My house feels a little empty this morning.

It took Mars and I almost three hours to pack up the clothing and shoes she'd amassed in the 11 days I spent with her and her 102.3 Now Radio morning show co-host, Crash. Three suitcases - and a stack of signed books by local celebrity authors - later, I dropped the duo off at the station. They kind of looked sad, standing outside the door, waiting to be let in like lost puppies.

Crash may have even shed a tear.

And why wouldn't he? Clearly the two had the best time of their lives.

We've shared some great memories. Like, my first book launch. Crash and Mars stood hung out with me and Simone Demers-Collins (Alberta Canola Producers Commission) while we waited for the crowd of kids... 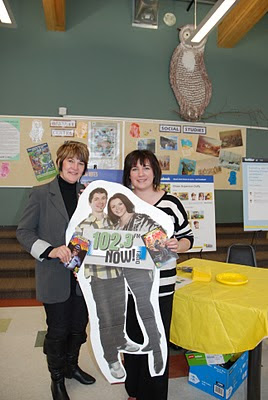 And then stood in line for me and illustrator James Grasdal to sign their book. (Luckily the young writer they butted in front of in line isn't planning to sue!) 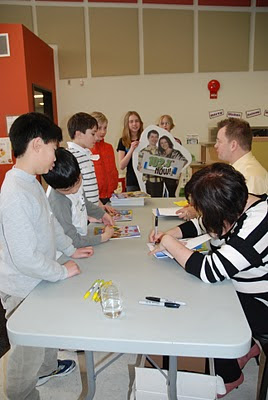 We toured the city... 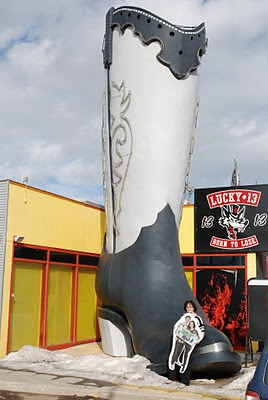 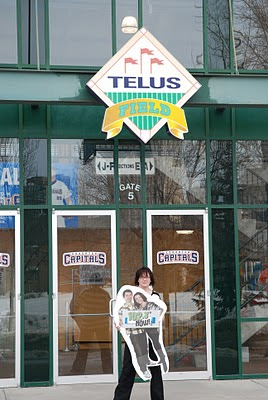 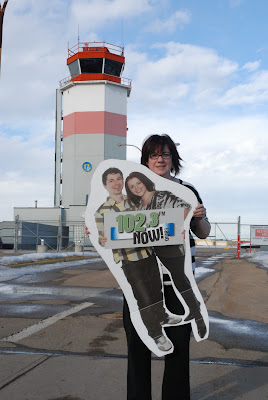 We also stood at every billboard or sat at every bus station branded with the 102.3 Now Radio logo... 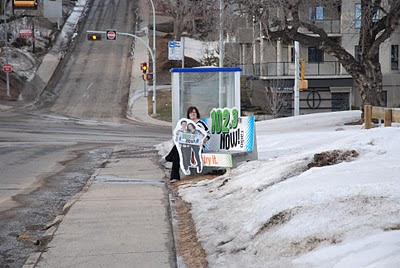 And, er, solicited a lot of kisses... (That's actually another time Crash cried...who knew he had a fear of snakes?!) 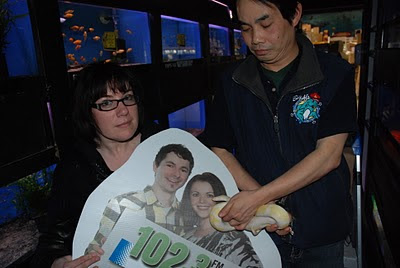 But the fun's over now. *sigh*
And with Crash and Mars back where they belong, I guess it's time to get back to work on all of those writing deadlines I've let fall behind.
Oh, and selecting a new muse.
Someone less skinny. (Sorry, Crash.)
And bare chested.
- Dawn
PS - Are you a young writer in junior high? Why not enter the Martyn Godfrey Young Writers' Award for a chance to win a copy of Fields of Home, and FREE admission to WordsWorth, the summer camp for youth who believe in the power of words. The first 100 entries will also receive a Martyn Godfrey novel. Get the full details here.
PPS - Want a leg up on the competition? Check out Chase Duffy's blog.
Posted by Dawn Ius at 7:50 AM 3 comments: