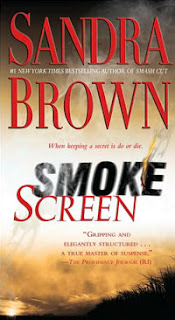 I'm almost certain I could track my affection for "bad boys" to my unabashed love for Sandra Brown novels. Her earlier work - before she crossed the line from straight romance to thriller / romantic suspense - featured sexy heroes with more edge than others writing in the genre.

But over the years I've done more than swoon for Sandra's characters - in fact, I've fallen head over heels in love with her writing.

As one of my previous posts can attest, she's been one of my idols for as long as I've wanted to write.

Still, I struggled a little through Smoke Screen.

The elements of craft are all there - the spot-on dialogue, brilliant description and sense of place, a compelling story buried beneath layers of secrets. But somehow the pacing felt a little off, and I never quite found a connection with either Britt Shelley or Raley Gannon.

By today's standards, Smoke Screen is a big book - more than 500 pages - and in my opinion, the story could have been told in a tighter timeframe. Hell would freeze over before I'd consider not finishing a Sandra Brown book, but the "big reveal" at the end felt a little anticlimactic given the considerable amount of text devoted to the back story.

That being said, I enjoyed the way past and present merged through well-told flashbacks. The personal stake for each of the characters was believable, and though I never quite fell for Raley, I could understand why Britt might. Their chemistry smolders rather than burns bright, appropriate, I suppose given the book's main plot. But in true Sandra Brown style, their ultimate connection is HOT.

Despite what might be interpreted as a lack of enthusiasm for Smoke Screen, I'd recommend reading it. Having put Sandra Brown on a pedestal, my expectations are high - and I'd venture a guess that even her really good (versus amazing) books are better than most in her genre.

Woot! I'm a quarter of the way into my 100 books in 2010 challenge - which is a relief since the end of April marks the end of the year's first quarter. At this pace, I'm on track to meet my personal goal. And it looks like my friend Karen is well on her way, as well.

I'm back on a paranormal kick, so next up for me is Jennifer Rardin. I'm looking forward to meeting the sassy Jaz Parks, vampire assassin.